FAYETTEVILLE, Ark. – Arvest Bank in Fayetteville is pleased to announce Eileen Jennings was named the 2016 Commercial Banker of the Year by the Central Arkansas Chapter of The Risk Management Association during its annual convention in Little Rock last month. 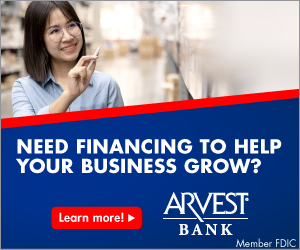 Jennings, a commercial banker, also has been promoted to Senior Vice President, Area Loan Manager for the Joyce Street location.

“Eileen has set the bar very high for any lender in Northwest Arkansas, not just with our bank,” said Ladd Lanier, Senior Vice President and Commercial Loan Manager for Arvest Bank in Fayetteville. “She has been a great resource for her business customers and an unfailing example of the high level of customer service for which Arvest Bank is known.”

Jennings started her career with Arvest Bank in Bentonville as a credit analyst in 2004 and moved into loan review in 2006. Six months later, she moved to Fayetteville as a commercial loan officer, where she has championed the bank’s Small Business Administration lending and supported the Arkansas Small Business and Technology Development Center. She created the Understanding Commercial Customers classes in Fayetteville, which have been adopted across the bank group.

“We are very proud of her accomplishments and know she will do a great job leading the Joyce team.”

Jennings graduated from St. Paul High School in St. Paul in 1996 and earned her Bachelor of Science, Business Administration in international economics and finance from University of Arkansas at Fayetteville in 2001.

She and her husband, Walter Jennings, have a daughter, Scout Pepper Jennings.