STILLWATER, Okla. – Arvest Bank is pleased to announce it has hired Adam Brown as community bank president in Stillwater. 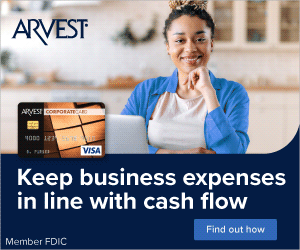 In that role, Brown is accountable for directing the local bank’s management team, as well as leading the branch and the team of associates in offering quality service and financial solutions for the bank’s customers and the community it serves. He will be based out of the Arvest branch located at 5215 W. 6th Ave. in Stillwater.

Brown graduated from Oklahoma State University with a bachelor’s degree in finance. His concentration was in commercial bank management, with a minor in accounting.

Among other civic endeavors, Brown has been active with The Saville Center for Child Advocacy and Young Professionals of Stillwater, and has coached numerous youth sports teams. Additionally, he was named Young Professional of the Year by the Stillwater Chamber of Commerce in 2015, and also is a graduate of its Leadership Stillwater program.

The son of a U.S. Air Force veteran, Brown lived in multiple places as a child, but spent the majority of his time in the Washington, D.C. area. He and his wife, Brooke, now live in Stillwater with their two sons.