Arvest Bank is proud to celebrate Karla Payne, who was honored recently with the CFO Lifetime Achievement Award at Arkansas Business’ annual CFO of the Year luncheon. The event was held Nov. 7 at the Embassy Suites in Little Rock. 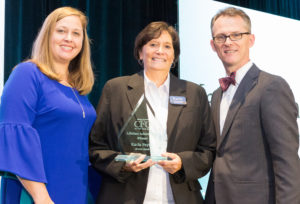 It was the second time in three years Payne has been recognized by Arkansas Business. She was named Large Bank CFO of the Year in 2016.

Payne has worked at Arvest for more than 36 years and has been CFO since 2010.

“I don’t have any immediate plans to stop,” Payne told Arkansas Business. “People ask me, ‘You’re getting a lifetime award — are you leaving?’ No, it’s not over! I have a lot of things I want to accomplish between now and the time I retire.”

In the same article, Payne recounted how the team-first approach she learned during her basketball career (She played in high school and at North Arkansas College in Harrison) has served her well during her time at Arvest.

“When I started, nothing was too big or too small,” Payne said. “I really like the finance side and how things work. As the industry changed over the years, it became even more interesting.

“However you go about learning, whether it is from school or other people, that willingness to learn is always going to serve someone well. That is something I’ve always been willing to do. There were lots of things that were put in front of me that I had never seen before, and I was always willing to dig in and learn about it.”

Arvest is proud to celebrate Payne’s achievements, and perhaps more importantly, the example she continues to set for our associates.