FAYETTEVILLE, Ark. – As the adoption of mobile banking continues to increase, community banks are working aggressively to keep up with customers’ demands for streamlined mobile banking tools. 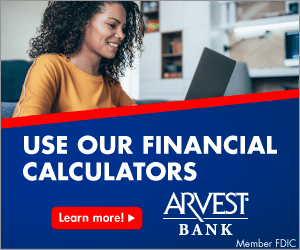 Mobile banking, the use of a smartphone or tablet to conduct financial transactions or manage a bank account, is popular among a wide swath of consumers. A survey by the American Bankers Association in August revealed that 70 percent of Americans surveyed had managed their bank account using a mobile device at least once during the previous month. Half of those surveyed had used a mobile device for banking purposes more than once during the past month.

Increased adoption of mobile banking tools such as apps fuels consumer demands for a more refined product. The most popular feature among consumers is the ability to login through fingerprint identification, offering enhanced convenience to the user. Arvest Bank recently launched its new Arvest Go mobile banking app, equipped with this and several other popular features.

“Arvest Go is a completely new app that offers fingerprint login, a quick view of accounts, complete customization of your app in terms of layout and priority views, plus push notifications and calendar reminders for bills,” Arvest Bank marketing director Jason Kincy said. “Equally beneficial to our customers is the fact we continually listen to their feedback, whether it’s through social media, word of mouth or other channels. Our customers will help drive future improvements to what we believe is already a robust new app.”

Kincy said Arvest Go also provides users the ability to send secure messages or questions to Arvest regarding their account or transactions, and to further customize their app with personal profile photos. The new app is in line with many of mobile banking users’ most-preferred capabilities.

The report also noted 56 percent of mobile banking users elected some form of push notification from their bank, such as a reminder to pay bills or transfer money.

“Community banks realize they need to continue to be innovative in their mobile banking practices because their customers have rising expectations in this area, as well as local and national options, when it comes to selecting a financial institution that offers the mobile delivery consumers are increasingly demanding,” said Joel Vaslow, chief operating officer of MSR Group, a national consumer research company that conducts surveys with more than a million retail banking customers annually. “We are seeing rapid advancement among banks on the local level and that’s good news for bank customers.”

In addition to the convenience mobile banking offers, consumers also demand that it provide safety in terms of their accounts and identity. The Federal Reserve report shows that more than half, 55 percent, of mobile banking users believe their information is somewhat safe, while 16 percent believe it is very safe.

“Security is the priority in any tool we offer customers, and the technical features of this new app, combined with the security features built into today’s smartphones, offer an overall level of security to our customers in which they can have very high confidence.”

While mobile banking is most important to younger consumers – 67 percent of those age 18-29 use mobile banking tools, according to the Federal Reserve study – the adoption rate among older consumers is growing significantly. Consumers age 45-59 have shown a 183 percent increase in adoption from 2011 to 2015, while adoption among consumers 60 and older increased 260 percent during the same time. What this means for banks is that the importance of feature-rich mobile banking tools continues to grow across entire customer bases.