Arvest Bank is pleased to announce Brandon Tate has assumed duties as president for Arvest Bank in Muskogee, Okla. 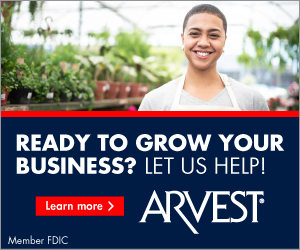 In that role, Tate will formulate a hierarchy of objectives, standards of performance, strategies, plans, and budgets, among other duties, for the Muskogee region. He will continue doing the same for the Pryor region, which includes Pryor, Tahlequah and Wagoner. Tate has been president in Pryor since 2017.

Tate earned a bachelor’s degree in business administration at Northeastern State University, with a major in finance and minor in accounting.

Active in numerous civic organizations, Tate is chairman of the board of the Wagoner Lions Club, as well as vice president and board member of the Fort Gibson Lake Association. He is also an active member of the Wagoner, Coweta, Pryor and Tahlequah chambers of commerce, and looks forward to expanding his civic involvement into Muskogee.

Tate lives in Wagoner with his wife, Heather, and their son.